Some years ago I found a strange CD at a record dealer, entitled „Falk im Juni“ by Nueva Germania. The sound was as extraordinary as the cover: dark ambient, sound collages, lots of old samples. I liked it from the beginning and started looking for more, buying CDs from Nueva Germania and other fellows on their label S.P.K.R., like Josef N or DDR. There had always been a unexplainable aspect of their releases – what do they mean, what do they like to tell? But there was no answer, without asking the people behind. After some time of trying I succeded in convincing Klaus Jochmann, the man behind Nueva Germania, to replay to my questions… 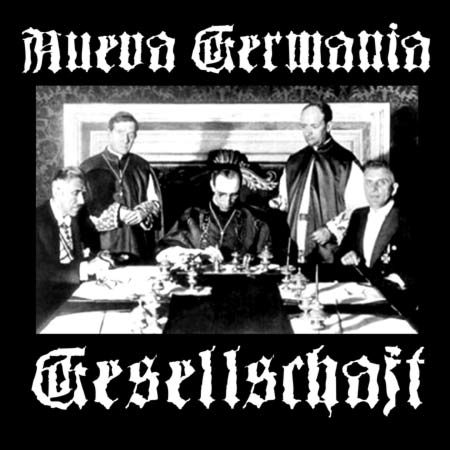 Can you tell us something about your musical background?

Well, I am a solitary psychedelic infant babee, I like the same music since I was 5 years old, at that moment my favourite album was „The White Album“ by the Beatles. I like extreme music but not only. I think each different kind of music puts a different colour to your soul and heart, so just find your mood and listen something that can amplify that.

How long do you create music, did you do other projects before Nueva Germania?

NG exists since 10 years, it was my first band. I’m playing in other bands, as a guest like in Josef N, DDR and Trademark or the forthcoming Aktion T4, a very interesting power-noise band with my friend Alexander Llende. I found it very interesting, to play music with other bands, there’s always something to learn from other people.

When did you start NG and was there a kind of „initial effect“?

I started with Nueva Germania when I discovered that nothing before was like my idea of the band. I think my first idea was inside my strange dreams…. I saw a cute and naked nurse, I just try to dress her with some black and white clothes of musick!

Is there a „red thread“ in your work?

I think yes but I don’t know where.

How can we imagine your composing method? What „instruments“ do you use?

Each of our albums, also each of our tracks maybe, were composed in a different way. The best thing I like in NG is the different prospectives, different premonitions. So our albums are always based on different producing methods. In some tracks we use electronics and computers, but in general we are almost analogic, using old instruments or synths, I think we have normally a sound of a well recorded 70ies industrial band, nothing more. Here is our power!

You use a lot of samples. What role does this samples play? Where do you find them?

Yes I love samples. I think they reminds us in an ancient period and sometimes they are very musically! I’m a collector of old records, old speeches and old movies, so it’s very easy find something impressed in my minds and singular to put in the NG musick. In general I don’t like instrumental tracks only, so when we don’t sing or screams (eheh) we love to put some word / sample, to specify that we are human.

Your releases are always some kind of „mysterious“ with a lot of ambiguous symbolism old photos etc. Do you like to confuse people?

No. I don’t think somebody can already do that. People are just confused theirselves. We use black / white covers only, in general ancient pictures, we never used controvertial symbols, but people saw that we are mysterious and ambiguous, just maybe because we really are, I really don’t know. NG starts in a very genuine way, I never thinking about building a band, graphics, etc. It is the projector of what I feel to realize for myself only, I just want to realise each product considering, it must be very fascionable to me.

„Nueva Germania“ is a village in Paraguy, founded by Bernhard Förster, a German anti-semite and husband of Friedrich Nietzsches sister Elisabeth, intended as some kind of „Arian residence“. Why did you choose this name?

I saw a documentary on this town, the name on the street-sign captured my attention, I don’t know why. That’s why in general I hate the speech of the band and I like only to see the name NG written. I think we are Europeans, I love that, our old traditions, maybe the name Nueva Germania reminds that.

Did you ever have problems with people disqualifying you as right winger or something like this?

In general no, never. Just some bands on the net try to talk about us as right wingers, but I think these was never an important point for me. In general I can say we are right, but not in the left and right sense, I mean in the right and wrong one!! I leave people think what they want, they are free, right? In general we received appreciations from different scenes, from the metal to the esoteric or ambient, then lots of traditional musicians give us their support and compliments. This is important for me. What is turning around us, what we can suggest, what is behind us, these are things I also can’t see and judge myself. What we are, is clear.

What „political messages“ or let’s call it ideas you like to transport with your music or isn’t there any attitude like this?

Musick can’t be politick. I’m interesting in esoteric, in the world of dreaming and to the moon, but not really in politics. We are planning to realise a split-album with the American Empire Falls, a very very lovely skin band. Some people was disgusted by that, sure not our people. I just was involved in this interesting collaboration, I love their sound, so why not? DDR is also an extremely left-wing oriented band, this was horrible!! Ahah by the way, nobody represents us in politics, so we are not interested in politics.

Can you tell us about your latest release, „Gesellschaft“? What is it about?

„Gesellschaft“ is an album divided in two parts. The first one is a kind of collages of different tracks mixed in one long track, a very soporific and slow composition. The second track is a long mantra, just meditation my dear…. The cover was one of the best ever, I love the anarcho-punk style in the NG graphics.

Do you see yourselves as a part of Industrial culture or any other „movement“, „scene“ etc.

In general I am a solitary man, no kids, no family, few friends. So my only way to be alive in a society is being inside a scene. Yes, we are the Industrial movement, when I go in treffens or festivals I really love to feel the peoples energy, talk with the people, look at what strange we are in our simply way to be ourself. I feel good with my people. We came all together from the place, where we will go all together.

You are a producer of music for allies like Josef N. Whats the main difference between producing and composing for you?

I am a good sound engineer, so people call me in studios, ahah. Then there are some interestings ideas not so close or necessary for NG, so I produce it with other names, but I don’t want to realise one album per month as mostly in the new industrial generation. There are too many similar bands that play at the same way, there is a very easy method to produce easy music. This is the way I don’t like.

You run the S.P.K.R.-label. Can you tell us something about this. How many releases do you have, where can people get them, what is your philosophy with that?

No. S.P.K.R. is the label of Karoline K (aka DDR). She’s got all ideas and involved me to produce the first official release by NG. Before I was oriented in the mail art movement and produced very small editions just for my friends‘ presents. This label tries to produce good music, in general with success, so most of the catalogue is sold out, but there are lots of distributions with our releases, also on ebay you can find it in general for a good price. Then for different problems the label stopped it’s production, except for NG and some more, in general they are not interested in signing new bands. I think, we will be with them forever, I hear it is ready to be out the new DDR album, planning Aktion T4, maybe a new Stalingrad, all interesting stuff. We are full of over-producing labels with anonymous names, it’s enough!

What are your musical future plans? Is it possible to see you live somewhere?

At the moment I’m in pause, since two years. NG have some new song and I think we will be out with the new „Armenia“ album during 2009. We planned to realize a double album compilation named „Heile Welt“ for the UK Hydra Records (with a very shocking nude cover), they paid us also an advance for that work and for the forthcoming album, but then they get problems inside their factory and we lost one year. Regarding our live activity, well, we never play live, because we was never interested in poor stages or small clubs, I ever though we never get a so big audience to organize a concert. So we never accept that. I think I would like to play live one day, maybe, in a special event like the Wave-Gotik-Treffen Leipzig, we will see! All the best to you all if somebody is interested please contact us at myspace or via Email.

This is an „historical“ interview from around 2008. I somehow lost Klaus traces over time. But there is a more or less active Facebook profile of Nueva Germania.