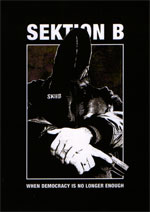 Sektion B – When Democracy Is No Longer Enough (CD, L.White Records)

I guess, this album will create some turmoil inside and outside the scene. The musical site is basic and solid Power Electronics, using all the typical elements in a well-done manner: propagandistic voices, often distorted, heavy loops, that carve themselves in your brain, sampling. Very fine stuff in a good recording quality and with great artwork.
But the political side of this statement will seperate listeners. As a leftist, my opinion is clear: old recipes for actual problems. But on the other hand, everybody has the right, to respond to a situation in his own way. Yes, Sektion B are conservative people, who are concerned about the development of our society. But are the refugees really our biggest problem? I don’t think so. 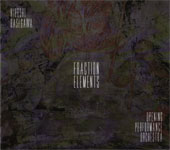 This CD is a co-work of Japanese noise artist Hiroshi Hasegawa also known as Astro and the Prague Noisists of OPO. The first track is created by Hasegawa – a noisy storm with a lot of bass frequencies and some machine like “hidden” rhythms. Sometimes more or less calm, sometimes really harsh.
Title 2 is a rework of Hiroshis material by OPO and that’s really harsh – true frequency brain fuck. OPO themselves contribute a sound close to the total distortion of a Harsh Noise wall. But this wall has a lot of cracks and scratches, where you can see (hear) through – field recordings / sound not easy to identify.
All three pieces are around 20 minutes each, a fine time to meditate in the eye of the storm. 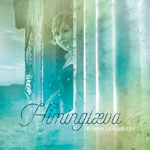 Islandic music often deals with the mysterious worlds of the island, and so does Himinglæva. Kristín Lárusdóttir, a trained cello player who already worked with Sigur Rós and HÖH, creates a dreamy atmosphere based mainly on processed cello sounds and some electronical extra. Her voice is a bit rough but fits well into her role as a story teller. Romantic, neo-classical record. Ideal to escape the reality, but a bit short (27 min).