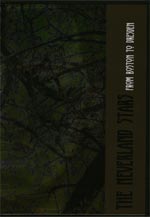 What a strange album! The Neverland Stars, a band consisting of the two fictious characters Sara Weizman and John Wilbur, living back in the 1910s, presents us their second album. If this wasn’t „only one of this underground productions“, I’m sure, the man behind, also known as Mädchen June would even press this sound on shellac records. But in 2011 the records come as CDRs and that’s fine, because only a few people still own a gramophone. They would even miss a very stubborn kind of electronica, nearly impossible to classify. Easiest way to avoid this, is to call it „experimental electronic music“ and that’s probably the best description. It all starts with the noise of a close whoopee, directly changing to a hectic club like track, foiled by a droning base, strange piano tones and other sounds. Each time you think, you know what’s going on, there is a change. Crazy, unheard noises are combined with very often used tones, reversed traces and electronic organs, by this making the listener mad. What the hell is this? – A question you won’t answer till the end. Horror and mystic atmospheres, weird samples, some rhythmic patterns, all layered in different variations, that’s what the album mostly is made of. Some people will surely be rejected by this score for an inner movie but if you get into it, it’s like a psychic vortex, drilling into your brain. This is a trip to your inner dark spheres, that can make you afraid of what you’ll see…

Switch: Did I say „inner movie“? There is an outer as well: a DVD with three short films on it. The first one, „Boston Massacre“ starts with the statement of a historical fact. In May 1915 Clara Haber killed herself. Her husband was the German chemist Fritz Haber, responsible for the use of Chlorine gas against the French troops in world war one. With her suicide his wife protested against this misuse of scientific work – a misuse that had killed 18.000 men some weeks before at the frontline at Ypern.
The video itself begins with some gas mask pictures and ends the same. In-between you mostly see structures of house walls, streets an other lonely places and some authentic film material, heavily manipulated, all underlined by a meditative music. It’s not easy to draw a line from the subject to the pictures. There is no straight story telling but some kind of trip through an emotional wasteland.
„The Inner Hole“ is mostly made of pictures of tower blocks in a suburb, forming abstract „paintings“ of them by layering and manipulating colors. Most of the pictures are fuzzy, but from time to time there are some clear architectural pictures. Once again the scenery is more or less static, even if there is a movement. The horror ambient sound empowers this effect. In-between there is one picture of a sleeping child – that’s really disturbing! Later you see the Mädchen June face – that’s all of living things in the film.
„Beim Sterben getragen“ (carried when dying) is a short sketch, where you see the ceiling of an old building, once again a bit fuzzy and with manipulated colors. From time to time it’s interrupted by historical photos of dead people.
It’s not easy to find a way of expression for these short films. There is no clear message and probably there isn’t even an intention, to tell something. They are just like flashlights into the mind of their creator, enlighten some specific moods…