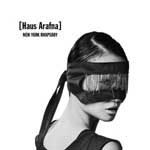 This time the fans of [Haus Arafna] didn’t have to wait very long: A few months after the band’s fourth regular album „You“, a new piece of art had been released. „New York Rhapsody“ is announced as a „sound track“ for a fashion show in Americas hottest city. This truely caused some confusion – who could imagine [Haus Arafna] doing such a thing? Artistically this surely was a big challenge and even an honour to be trusted that way. But what about the result?
Of cause, you can’t create a to harsh album for such an event. There are mainly no Industrialists in the audience and in the end, in the first row they came to see the fashion show. So we don’t have to wonder, that there is much more November Növelet pop than [Haus Arafna] madness in this release. No surprise, this is an evolution going on since the release of „Butterfly“ and I’m sure some people’ll like it. But I’m not happy with that. [Haus Arafna], once a wild water have become a litte, friendly brook, often only rippling along. If there were no songs like „Heart Beats Blood Flows“, I was a bit disappointed.
Not to get me wrong. Compared with most other bands [Haus Arafna] still is a class of it’s own, an attitude also reflected in the material beauty of their releases. Heavy vinyl, great artwork, additional post cards, a lyric sheet – all Galakthorroe standards. But in my view, they musically reached some kind of dead end. The sound is still very dark, beautiful and haunting, but it became a more „virtual“ or „superficial“. A bit like fashion. Something got lost. No piece of art, making you an addict, no album, to hear again and again and again. It’s fine and that’s all…