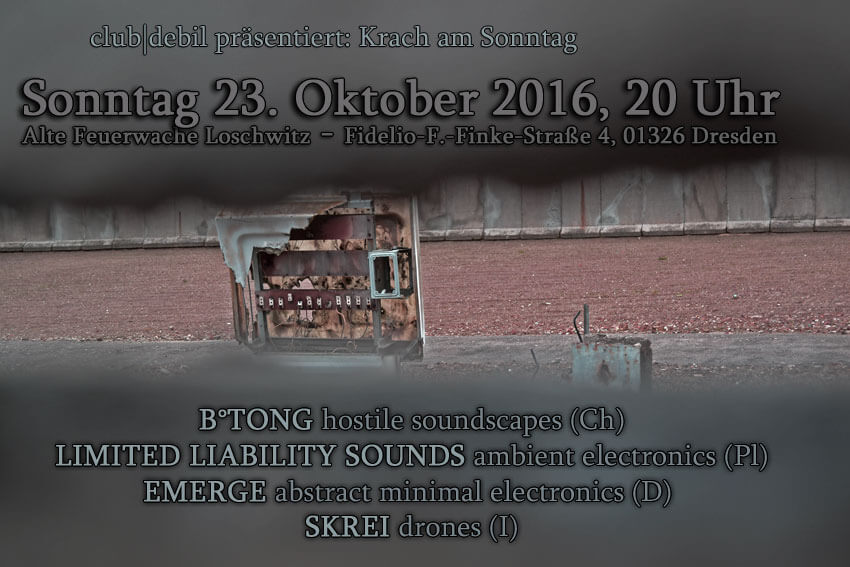 Chris Sigdell is an experimental electronic musician. He developed a soft spot for early industrial textures and pioneering ambient soundscapes while cutting his teeth in cult industrial band NID (1995-2005). He builds an interesting body of work that moves in various directions at the same time. From dealings with ambient and isolationism on one hand and experimental music, ranging from the soft microsound end to the more engaging noise end, in a clever combination of ideas…
Since 2005 he has performed at more than 200 venues in Europe, Russia, Canada and the USA, and has appeared at various experimental and industrial festivals such as: Norberg Festivalen (S), Temple Of Silence (PL), PNEM (NL), Støy På Landet (N), Monsters Of Rot (IRL), Destroy All Artifacts (UK), Unser Industrie (DE), Ausklang (DE), Shift (CH), Lab30 (DE), Kildemose Festivalen (DK), Zeit Für Lärm (DE), Sinus Series (CH).
b°tong has released over 10 albums on labels like Drone Records (DE), Zoharum (PL), Attenuation Circuit (DE), Noecho Records (UK) and Gears Of Sand (USA). Nowadays he is signed to Greytone („Hostile Environments“ CD) and Silken Tofu („Prostration Before Infinity“ LP).

Polish ambient/electronic musician Adam Mankowski. Project is active since 2006, when his first official CD-R release „So Hysterical!“ was released. The name „Limited Liability Sounds“ is a kind of protest against the treatment of noise as a phenomenon that does not deserve the term as a musical genre. Mankowski claims that the noise is something natural which has always accompanied man, and has the same rights as silence. Music by LLS is a mixture of drones, experimental electronics, ambient, sometimes noise and field recordings. For the last three years he has been working with a few skillful artists/producers like Ishida Naoki (Japan), Stoned Wire (Hungary), Dao De Noize (Ukraine), Gimu (Brazil) and Luca Asari (Italy).

Sascha Stadlmeyer is inspired by the minimalist traditions of experimentalism and non-academic noise music, focusing on generating sound structures intended to make atmospheres that are open to the listener’s own interpretation. The choice of sound sources he uses is usually very limited. In most cases only rudimentary pieces of the original sounds are recognizable due to various treatments. Emerge also uses and recycles raw material from a variety of artists/musicians.

is a drone project of Giuseppe Capriglione.
The loop tape is only sound element of live . Processing and working with multitracker tape recorder, are creating a minimal Drone Sound.
giuseppecapriglione.bandcamp.com