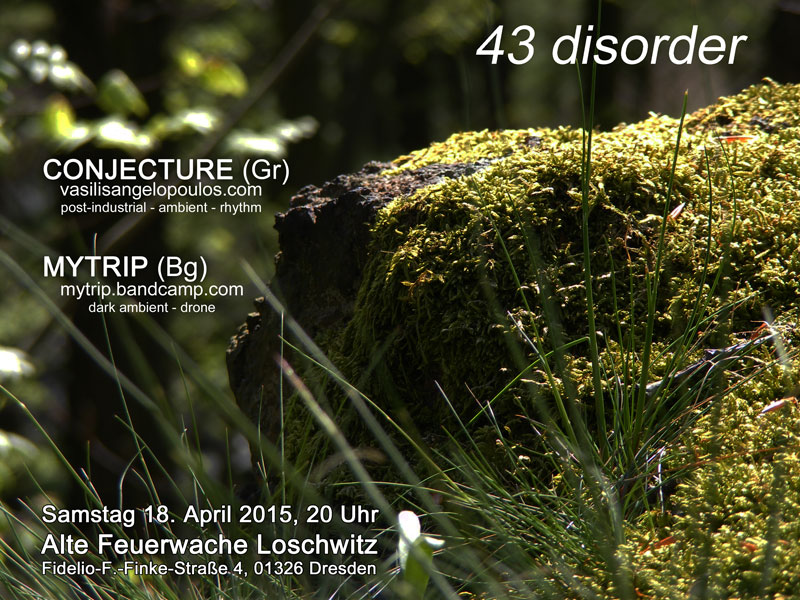 Conjecture is a post-industrial project by Vasilis Angelopoulos (We Came From Waters), based in Greece. Generating noise sound waves and combining them with field recordings, he has been creating Noise music since 2005 under the project Gas Masked Lestat. After being attracted by the combination of dark-ambient and industrial music he created Conjecture and composed one unreleased demo EP. One year later, using the ideology of neo-conceptual art and the sensationalism movement, he created his first full length album “Enter the Grove” released by the Greek label Ars Nocturna. With „Enter the Grove“ Conjecture project attracted the interest of Raumklang Music label (Dirk Geiger, Basementgrrr, Huron) and in the same year he was signed. Now he has already composed his second full-length „Nunavut“, which is going to be released in March 2015.

Mytrip is a solo Dark Ambient / Drone unit ran by Angel Simitchiev, a musician and composer from Bulgaria – MA in ‘Media Composition and Electroacoustic Music’ from the National Academy of Music and a Sound Art lecturer in the National Academy of Arts, both in Sofia, Bulgaria. Actively collaborating with art forms such as theatre, dance & performance, video art & installations, (short) film. With several years of history in the hardcore punk scene, currently mostly revolving around the ambient / drone genres. Addicted to performing live.
Mytrip has been around for almost a decade now, releasing mostly on tapes, currently cooking his first 7” vinyl. His drones have so far been performed live in England, France, Belgium, Germany, Czech Republic, Greece, Romania, Serbia and of course all around Bulgaria.